The Hyundai Elantra has been a steady seller for Hyundai in New Zealand, peaking with the fourth generation car, which was launched in 2005. Hyundai’s image was continuing to grow at that time and the Elantra hatchback became a core component of the range. Since then the four door Elantra has seen lower, but steady sales, through the fifth generation, and now it’s time for the sixth generation (internally named AD) to replace the older MD fifth generation car.

The new Elantra may not look like a huge step from the older model but what it does do is build substantially on the features available on the car without increasing the pricing.

Externally the Elantra benefits from a few styling changes that add to the aerodynamic performance of the car, including front bumper mounted vents that smooth airflow over the front wheels, cleaner semi-diffuser under the rear bumper, and a small upturned spoiler at the rear edge of the boot. 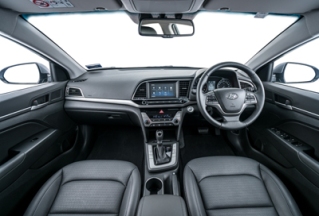 front fog lights. The entry-level model is available in six-speed manual for NZ$34,490, and a six-speed automatic for NZ$35,990.

If you think something is missing, it’s the Limited model, which will be available before the end of the 2016. That car will have a 150kW/265Nm engine and a choice between six-speed manual and seven-speed dual clutch gearboxes, while the interior will get a special treatment. There’s also a turbo model on the way, with essentially the same engine out of the Veloster turbo, with an aggressive body kit, sports interior, and big alloys.

The new AD Elantra is constructed with more ultra high tensile steel than the older MD model, with the amount of standard steel falling from 43% to 31.5%. This, plus an increase in industrial body adhesives from three meters to 120 metres in the result in an increase in torsional rigidity by 25.5%.

There’s also been quite a lot of change under the car, with a new front subframe with solid mountings being changed to bushes, and a new steering rack repositioned forwards and upwards for a more direct connection to the front axles. There are also stiffer bushes in the rear torsion beam suspension, and the rear dampers have been changed from an inclined position to the vertical position to reduce stiction (a sort of cross between sticking and friction), which can lead to inconsistent response from the suspension.
On the road the new Elantra feels pretty smooth, but has a vaguely European feeling to the tuning, with large bumps being absorbed but smaller high frequency vibrations working their way through the suspension to the body. The 2.0 litre engine is willing to rev, although it does sound pretty strained when you are really thrashing it, which is something you really need to do to make determined progress in the car. The engine may have 112kW and 192Nm but with the power peak at 6,200rpom and the torque building to a maximum at 4,000rpm 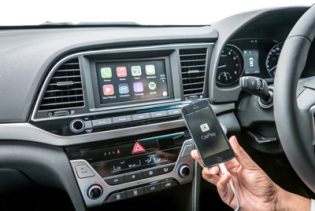 this really is an engine that needs to be revved.

The interior quality is rig
ht up there with most of the Japanese competition, but Android users are denied most of the car’s full infotainment features, including navigation. Android compatibility is on the way, but be warned if you don’t have an Apple device. The Smart Boot function (which was inherited from the MD model) can also be a hassle. It detects if the key holder is standing at the back of the car and opens the boot. This is fine, but when waiting for my co driver to arrive after the lunch stop on the launch ‘my’ car helpfully opened the boot, as I happened to be standing directly behind it.

These issues aside, and the lack of a hatchback, are

the only real downsides to the new Elantra. It drives well, handles above average for the class, and looks very contemporary. As for me, I’m waiting for the turbo to arrive.