You can be forgiven for a certain sense of déjà vu at this Colorado Xtreme concept vehicle, it being shown at the Bangkok Motor Show in March. But we get to see it in person before the Aussie’s do, so that’s something. The Xtreme’s official New Zealand unveiling will be at the Fielddays this month but NZ motoring journos were allowed a preview.

There’s a difference between the Bangkok car and this one, as it has been entirely rebadged to change it from a Chevrolet to a Holden Colorado, and more importantly the Xtreme points the way forward for what Holden terms ‘a substantial upgrade’ for the facelifted Colorado due here in September.

The first thing you notice about the show car is the paint finish. Called ‘furnace’ it’s a very bright orange matt finish that really does suit the shape of the vehicle. Don’t expect it on the colour options in September though, as the amount of time taken on the paintwork alone would push it way past $6,000 or so.

Changes to the body itself are limited to new headlights, and taillights as well as front and rear bumpers. These are likely to make it to production and it would be nice if the black horizontal line across the grille (a Chevy trademark) will remain, as it gives the front of the Colorado some real aggression.

There’s also a front mounted winch and recovery gear (including a high lift jack) mounted in the back. They all look good, but if something goes wrong with the winch you’d have to remove the entire front bash plate, and if yo
u have gear in the back you’d have to remove it all to get at the recovery gear. That doesn’t matter of course, as this is a show car, and it’s surprising eno 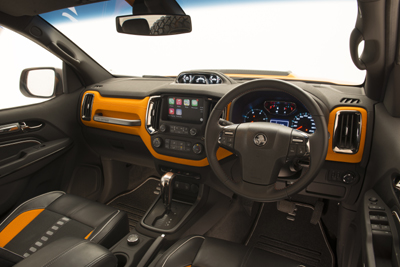 ugh that it can be driven, and no, we were not allowed to drive it.

The biggest change, and one that hopefully makes the produc
tion cut, is the dashboard. It replaces the current Colorado’s massive circular control unit on the centre console, wit
h a ‘floating’ design delineated by bright orange trim. The
screen for the infotainment is also larger, and as is current the system has Apple Carplay, and Android Auto. The look is far more upmarket, although of course on the production vehicle there probably won’t be bright orange stitched trim to make the dashboard stand out.

What you can’t see from the pictures is that Holden has concentrated on adding refinement to the rather agricultural Colorado. Sales of the competing Ford Ranger have surprised even Ford New Zealand, and Holden needs to pull up some of the lost ground.

There are no details on what will actually be done, but expect changes to suspension tune, including bushes and dampers, as well as refinements to the mounting of the drive train.

And Holden says that almost 70% of the stuff bolted onto the Xtreme will be available as options, so you will be able to get pretty close to the look of this vehicle.