It’s one of those invitations tat you really can’t turn down, ‘how about a drive down to a hot rod festival in the new 2018 Ford Mustang?’. I immediately put aside all plans to wash my hair that day.

The new Ford Mustang has a few notable improvements over the old, and while the power upgrade on the 5.0-litre V8 to 339kW (or 450 horsepower) is one of the headline grabbing bits, there’s a fair bit of technology that has been thrown at the car. There’s a new ten-speed automatic gearbox, optional MagneRide adjustable suspension, new all-digital instrument cluster, and a comprehensive active safety package.

This is a fast car. The road to Waihi and the Beach Hop is normally slow and winding. It’s still winding, but it is no longer slow. The Mustang isn’t the smallest sports car in the world, but it grabs the road and latches on like a politician on a campaign donor. The V8 fires you out of a corner with verve that boarders on the insane, and on the hardest sports settings it sounds like a race car thanks to the now barely restricted exhaust pipe. 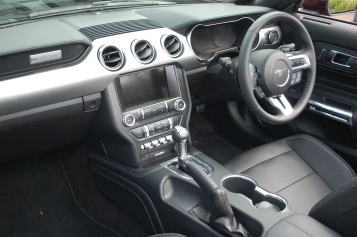 But it would be a mistake to think that you should use the manual mode on the ten-speed gearbox, as there are far too many gear ratios packed far too close together to keep track of them. You are constantly stabbing at the gear lever and/or the gearshift paddles and that just ensures sensory overload when the corners are stacked ten high and coming at you once every six seconds.

When you leave the gearbox alone and still staying in the highest full attack gearbox settings, you’ll find that the gearbox has been tuned to complement, rather than hinder an extremely spirited drive. The ten-speeder will shift down on braking for a corner, hold an appropriate gear through the corner and then kick down on exit for a slingshot effect into the next set of curves.

At the same time the Mustang will do a good low speed cruise in town, with the exhaust burbling and popping and generally sounding badass.

Of course, we only drove the V8 GT down to the Beach Hop, as taking the 2.3-litre Ecoboost Mustang could have resulted in a less than enthusiastic reception.

What is shared between the Ecoboost and GT is the new all-digital dashboard, which is a widescreen digital display upon which you can select not only display colours but what form the instruments take. You can have the readouts as dials, strips, curves, or generally any shape you want. You can have the speed as a dial, with revs as a band across the top, or vice versa, and you can have them all in different colours. You can spend hours playing with the display.

A full review of the new Mustang will be along soon, but rest assured it still feels like a real American sports car. 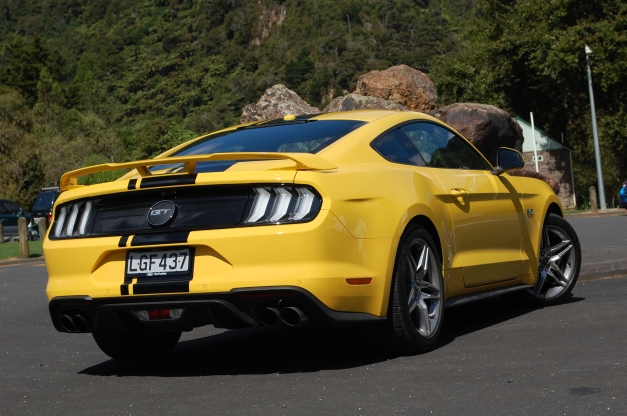